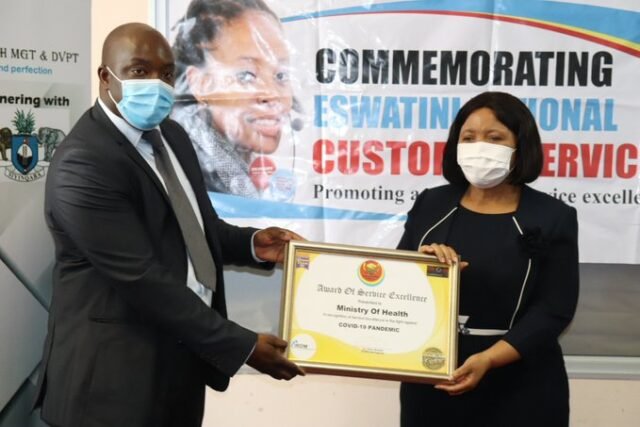 PUBLIC confidence that Minister of Health Lizzie Nkosi is doing a sterling job in the leadership of the nation #COVID19 response has received further validation with a Service Excellence Recognition Award.

The accolade comes amidst growing evidence that the health sector has the pandemic firmly under control as figures continue to dial down each week. On three days last week, new infections were down to single digit figures – only five out of 250 people tested on Tuesday being found with the virus.

As of Saturday (24 October 2020) only 213 people were under medical care for the virus which has killed a total of 116 people and infected a total of 5831. Of these however 2485 had ben treated and recovered.

According to Africa Centres for Disease Control and Prevention (CDC) director Dr. John Nkengasong, Eswatini is in the top 4 Africa best performers in the #COVID19 response, and 1 of 3 SADC countries making that substantial progress.

The Eswatini milestone is consistent with a general trend on the African continent which is bucking the universal trend. While the pandemic has returned with a resurgent vengeance in America, Asia, Europe, Eurasia, the Pacific and USA, the virus health and death impact on Africa has not only been low, but recovery is sustained.

In his weekly media update on the coordinated efforts of African Union Member States to combat the pandemic in their respective countries; and to also highlight steps taken to implement the joint continental strategy for COVID-19 response in Africa,

Dr Nkengasong highlighted that the kingdom had managed to reduce new cases of COVID-19 by 16 per cent in the past four weeks tied in fourth position together with Namibia after Central African Republic; Gambia and Madagascar. Southern Africa, he said, had the lowest percentage of new cases per week, at one per cent.

However the continent cannot rest on its laurels as a second wave of the virus is anticipated during the festive season beginning in November to January.

“We are increasing testing and contact tracing. We have also distributed equipment such as ventilators to about 18 member states that we feel could have challenges in the event the second wave comes.”