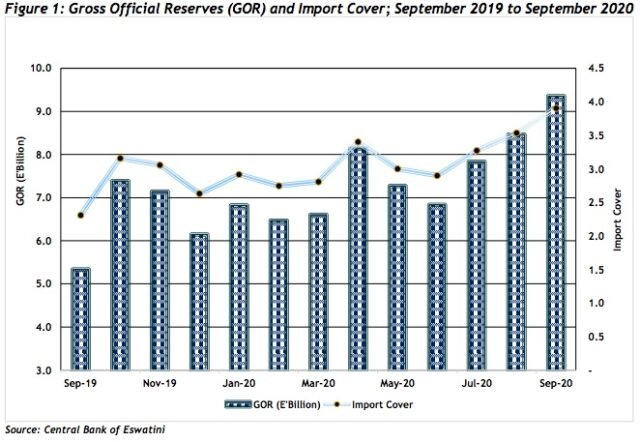 Gross official reserves stood at E9.3 billion at the end of September 2020, depicting an increase of 10.5 per cent over the month and 75.3 per cent year-on-year. In line with the improvement in reserves, the import cover increased to 3.9 months in September 2020, from 3.5 months in August 2020. The reserves were boosted by foreign exchange proceeds from the IMF budget support loan to government received over the month. Valued in special drawing rights (SDRs), the reserves grew to SDR397.3 million at the end of September 2020, from the SDR357.9 million registered the previous month. This was equivalent to growth of 11.0 per cent month-on-month and 54.2 percent over the year.

Credit extended to the private sector grew by 1.0 per cent from the previous month but decreased by 0.4 per cent over the year to settle at E14.9 billion at the end of August 2020. The rise in private sector credit was driven by credit to other sectors and households whilst credit to businesses declined over the review period.

Credit extended to businesses declined by 0.5 per cent over the month and 7.2 per cent over the year to close at E6.5 billion at the end of August 2020. Contributing to the contraction was credit to these subsectors; manufacturing (-4.2 per cent), real estate (- 3.4 per cent), transport & communication (-2.3 per cent) and community, social & personal services (-2.2 per cent). Credit to these subsectors, on the other hand, increased over the review period; distribution & tourism (7.8 per cent), construction (6.6 per cent) and agriculture & forestry (2.8 per cent). Net claims on government by the banking sector stood at E1.2 billion at the end of August 2020, 96.6 per cent higher than the previous month but 38.2 per cent lower than the previous year. The monthly increase was largely attributed to growth of 13.4 per cent in claims on central government, in line with an increase in its borrowing from the Central Bank. The rise in claims surpassed the 2.8 per cent growth in government deposits.