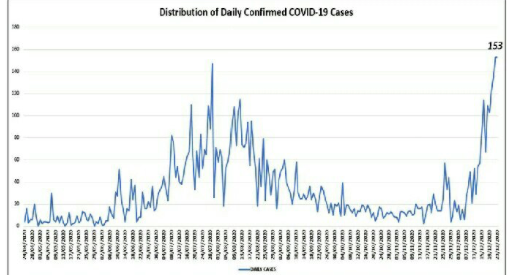 THE Second Wave of Covid-19 has unleashed a grim trail of death. Almost 22% of all people who have died of Covid-19 in the past 9 months, died during the past first 3 weeks of December 2020.

On Wednesday (23 December) Covid-19 killed 11 people – the highest number of people in a single day. The minister of health Lizzie Nkosi said the deaths bring the total number of Covid-19 victims in the country to 153.

Infections are also rising alarmingly. In the past four days between 20 and 23 December, infection rates climbed from 124 a day on the 20th peaking at 153 on the 22nd and 23rd December. These are the highest daily infections rates since the pandemic started. The previous record was in 147 infections on the 29th July 2020.

In the past week, the virus was particularly brutal on frontline health workers – coursing through the principal the Good Shephard, the principal hospital of the Lubombo Region. Here it killed a senior hospital executive, and infected the entire administrative staff, throwing hospital in disarray.

It is a major setback as the Good Shephard which is highly respected for its effectiveness and level of patient care and expertise in the diagnosis of malaria, one of the notifiable diseases in the country. Though largely eradicated and now under control, cases are imported from neighbouring countries where the disease is still rampant. As the regional referral hospital responsible for the Lubombo region bordering Mozambique and South Africa, it is an important health facility.

The hospital is unlikely to receive relief any time soon as the ministry of health is now under heavy strain, is seriously short staffed. Last week it cancelled holidays and recalled all health staff to work.

Last week Covid-19 killed one of the most prominent public health leaders, Dr Austin Ezeogu. A long-time Senio Medical Officer (SMO) of the Mbabane Government Hospital, Dr Ezeogu died of a COVID-19-related illness at the Lubombo Referral Hospital which lies a few kilometres north of Good Sherphard and is the principal Covid-19 treatment centre.

Covid-19 has also claimed the life of the country’s Prime Minister, Ambrose Dlamini who fell ill in November. On December 1, he was airlifted to South Africa. At the time,  the acting Prime Minister said his condition was improving. He died in South Africa 3 weeks later and will be buried according to royal customary rites on Boxing Day.

Covid-19 has now killed 142 people since the first infection was recorded in March. And infected over 7700 people. Both treatment centres, the Mavuso Trade Fair Centre field Hospital, the former TB Hospital and the Lubombo Treatment center are reportedly full.

Health authorities have been urging public caution to prevent infection as a new Covid-19 strain that is said to be highly contagious has been confirmed in neighbouring South Africa. This new strain has been identified in the United Kingdom and South Africa. There are fears that large numbers of Swazis in the diaspora returning home for the Christmas season and porous borders may import this new strain into the kingdom.